en.wikipedia.org/wiki/Gravitational_constant
The gravitational constant denoted by letter G, is an empirical physical constant involved in the calculation(s) of gravitational force between two bodies. It usually ...
Laws and constants - Dimensions, units, and magnitude - History of measurement
Goethe and the geography land of Germany  explained the interaction of gravity with EARTHLY existences....such as human brain atomic mass, the land of Germany, and the interaction of the gravity field with BOTANY and its anti-gravity vectors that enable  wheat, oats, and barley to germinate and grow tall ...... a process later used by cellulose oak trees, evergreen trees and the giant RED.wood trees with their  COMPUTER EARTH system 370 abilities ..... READ.wood trees and the decision theory processing abilities of LU = Logical Unit = cellulose LUMBER -->  Lu + mber --> Logical unit as one MEMBER of Nature's partitioned data set  ...data space ....of mathematical physics  EARTHLY space/ time systems.
As we all known in year 2012 ...... the state of CA = California with its thinking redwood trees   ..... is a Linear control STATE space  AND  is a VSAM data  space CA = Control AREA.    CALIFORNIA  universities  refuse to discuss these  matters of  every day REALITY. They have an intellectual  social science alliance with Hollywood make-up teams  AND university ENGLISH departments  with creative writing class 101 ..... advanced explanations of world affairs and EVENTS.
Goethe --> G + oe + the --> Gravity order entry thesis ...writer /author / CLUES of gravity society life
Johann Wolfgang von Goethe
Johann Wolfgang von Goethe (German), 28 August 1749 – 22 March 1832) was a German writer, artist, and politician. His body of work includes epic and lyric poetry written in a variety of metres and styles; prose and verse dramas; memoirs; an autobiography; literary and aesthetic criticism; treatises on botany, anatomy, and colour; and four novels. In addition, numerous literary and scientific fragments, and over 10,000 letters written by him are extant, as are nearly 3,000 drawings.
Let's look at the work Faust and its messages.

DNA is a double helix formed by base pairs attached to a sugar-phosphate backbone.

Faust is a tragic play in two parts:

imagine.gsfc.nasa.gov/docs/features/topics/gwaves/gwaves.html
Most scientists describe gravitational waves as "ripples in space-time." Just like a boat sailing through the ocean produces waves in the water, moving masses ...
Above, we see gravity waves in bio-physics format  ...the  gravity string/ ribbon component of deoxy.RIBON.ucleic    acid.
G = Universal gravity +  G = Gua + the SYS1.Catalog has NINE lives.
The IBM OS/JCL system 370 has Base 16 hexadecimal lives.

From Wikipedia, the free encyclopedia
Jump to: navigation, search

A series of codons in part of a messenger RNA (mRNA) molecule. Each codon consists of three nucleotides, usually representing a single amino acid. The nucleotides are abbreviated with the letters A, U, G and C. This is mRNA, which uses U (uracil). DNA uses T (thymine) instead. This mRNA molecule will instruct a ribosome to synthesize a protein according to this code.

The genetic code is the set of rules by which information encoded within genetic material (DNA or mRNA sequences) is translated into proteins (amino acid sequences) by living cells. Biological decoding is accomplished by the ribosome, which links amino acids in an order specified by mRNA, using transfer RNA (tRNA) molecules to carry amino acids and to read the mRNA three nucleotides at a time. The genetic code is highly similar among all organisms, and can be expressed in a simple table with 64 entries.

The code defines how sequences of these nucleotide triplets, called codons, specify which amino acid will be added next during protein synthesis. With some exceptions,[1] a three-nucleotide codon in a nucleic acid sequence specifies a single amino acid. Because the vast majority of genes are encoded with exactly the same code (see the RNA codon table), this particular code is often referred to as the canonical or standard genetic code, or simply the genetic code, though in fact some variant codes have evolved. For example, protein synthesis in human mitochondria relies on a genetic code that differs from the standard genetic code.

A codon is defined by the initial nucleotide from which translation starts. For example, the string GGGAAACCC, if read from the first position, contains the codons GGG, AAA, and CCC;

During the process of DNA replication, errors occasionally occur in the polymerization of the second strand.
Missense mutations and nonsense mutations are examples of point mutations

From Wikipedia, the free encyclopedia
In genetics, a nonsense mutation is a point mutation in a sequence of DNA that results in a premature stop codon, or a nonsense codon in the transcribed mRNA 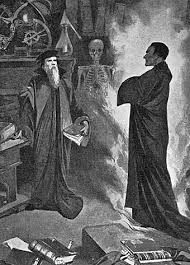 Goethe  and Mephistopheles, a Devil

Faust Part One takes place in multiple settings, the first of which is heaven. Mephistopheles makes a bet with God: he says that he can lure God's favourite human being (Faust), who is striving to learn everything that can be known, away from righteous pursuits. The next scene takes place in Faust's study where Faust, despairing at the vanity of scientific, humanitarian and religious learning, turns to magic for the showering of infinite knowledge. He suspects, however, that his attempts are failing
What CLUES do the above character provide:
God --> Gravity orbital  diameter  (of revolution around the SUN ...known as the SUN GOD)
Gretchen --> G + ret + c ---> Gravity computer Return codes
Gretchen --> G + ret + c ---> Guanine bio-computer RETURN codes
Valentine --> Valence electron shell  thoughts
bet with God --> Stephen Hawkings comments about God
Thus we see NATURE and  it's double-helix technology  ...or binary systems exploration method VIA 2 human agents:
In both humans .....gravitational energy ...provided
.................................wit.......al  ---> vitality  and curiosity about existence and its need for a accurate symbolic description in equations, etc.