RD-blog-number-3064
The USS Cole bombing was a suicide attack against the United States Navy guided-missile destroyer USS Cole (DDG-67) on 12 October 2000, while it was harbored and being refueled in the Yemen port of Aden. Seventeen American sailors were killed, and 39 were injured
Let's look at the chain-of-events caused by the incomplete reports about the U.S.S.COLE incident.

The event was  really EARTH, Nature, and the water molecule continuum battle    VERSUS the U.S.Navy and their biased explanations  of life and reality  on EARTH.  The Navy and their university and corporation associations were   expected to understand the basics of water, the  history of water, and modern molecular  wars in year 2000.   The U.S.S.Cole was a signal.   The signal about the deeper levels of REALITY was ignored by universities .....
consequently a sequence of events occurred  between October 2000 and year 2013.  Let's look at the positive side ...... that the information sequence provided  by the tragic  events has given scientists important data about the fundamental architecture and mechanics of existence on EARTH.
Given the  initial event of October 2000, let's continue our study of Nature's military expression  systems VIA   water molecules and their evolutionary extension .... water molecules packaged as humans ..... Natures' version of  bottled water.

The source of anger ....... covalent bonds  in  Illinois and Northern Illinois

hyperphysics.phy-astr.gsu.edu/hbase/chemical/bond.html‎
Covalent chemical bonds involve the sharing of a pair of valence electrons by two atoms, in contrast to the transfer of electrons in ionic bonds. Such bonds lead ...

Early concepts in covalent bonding arose from this kind of image of the molecule of methane. Covalent bonding is implied in the Lewis structure by indicating electrons shared between atoms.

The term "covalence" in regard to bonding was first used in 1919 by Irving Langmuir in a Journal of the American Chemical Society article entitled "The Arrangement of Electrons in Atoms and Molecules". Langmuir wrote that "we shall denote by the term covalence the number of pairs of electrons that a given atom shares with its neighbors."[6]

The idea of covalent bonding can be traced several years before 1919 to Gilbert N. Lewis, who in 1916 described the sharing of electron pairs between atoms.[7] He introduced the Lewis notation or electron dot notation or Lewis dot structure in which valence electrons (those in the outer shell) are represented as dots around the atomic symbols. Pairs of electrons located between atoms represent covalent bonds. Multiple pairs represent multiple bonds, such as double bonds and triple bonds. An alternative form of representation, not shown here, has bond-forming electron pairs represented as solid lines.

Lewis proposed that an atom forms enough covalent bonds to form a full (or closed) outer electron shell. In the methane diagram shown here, the carbon atom has a valence of four and is therefore surrounded by eight electrons (the octet rule); four from the carbon itself and four from the hydrogens bonded to it. Each hydrogen has a valence of one and is surrounded by two electrons (a duet rule) - its own one electron plus one from the carbon. The numbers of electrons correspond to full shells in the quantum theory of the atom; the outer shell of a carbon atom is the n=2 shell which can hold eight electrons, while the outer (and only) shell of a hydrogen atom is the n=1 shell which can hold only two.

While the idea of shared electron pairs provides an effective qualitative picture of covalent bonding, quantum mechanics is needed to understand the nature of these bonds and predict the structures and properties of simple molecules. Walter Heitler and Fritz London are credited with the first successful quantum mechanical explanation of a chemical bond, specifically that of molecular hydrogen, in 1927.[8] Their work was based on the valence bond model, which assumes that a chemical bond is formed when there is good overlap between the atomic orbitals of participating atoms. These atomic orbitals are known to have specific angular relationships between each

en.wikipedia.org/wiki/Northern_Illinois_University_shooting‎
The Northern Illinois University shooting was a school shooting that took place on February 14, 2008. Steven Kazmierczak shot multiple people on the campus ...
Shooting - Perpetrator - Reaction - Earlier incident and possible ...
The incident happened at the campus's Cole Hall.
At approximately 3:05 p.m. CST, Steven Kazmierczak entered a large auditorium-style lecture hall in Cole Hall (Auditorium 101) with approximately 120 students, where an oceanography class was in session.
Thus we see the chemistry molecule expression of anger.
What chemistry equation is expressing the anger?
That requires a lot more research.
An example might be ... the H = hydrogen model ..... with  the picture of the  building below.
Perceive the building as a left HALL classroom  and a right HALL classroom  --->
the parallel equivalent at a atom/molecule LEVEL     .......
left H = Hydrogen and a right H = Hydrogen. Let's look at the molecule SIGNAL evolution.
We started with the  cement/concrete/brick building known by proper noun:  Cole HALL.
This univeristy buildng in DeKalb, Illinois can be theoretically seen by  the UNIVERSE view of EARTH  .... as EARTH LAB   and a  chemistry lab  ... in physical chemistry and social chemistry.
The university buiilding  from the Milky WAY universe view point  (like a NASA astronaut's VIEW of EARTH)........  looking  at the  university structure ... sees the  building is comprised of 2 H --> 2  school classroom lecture HALLS.
Nature's  SYMBOL PROCESSOR can equate these 2 lecture Halls to  H = Hydrogen  (that is ... Cole HALL is the larger scale  model, the amplified version of hyfrogen atom).      Thus the perception process provided by NATURE  ......  Hydrogen atoms   VIA the more visible, obvious  .... eye/optical image  of the cement/ conrete Hall model ..Cole Hall.

www.merriam-webster.com/dictionary/symbolism‎
the art or practice of using symbols especially by investing things with a symbolic meaning or
by expressing the invisible or intangible by means of visible

Covalent Bonding in Water I --->  oceanography class was in session.

Covalent Bonding in Water II --> oceanography class was in session

--> the COLE Hall  oceanography classroom for U.S.Navy intellectuals regarding   the U.S.S.Cole  of   October 2000    and their university THINK TANK errors in the simple explanation. Hydrogen atoms and an oxygen atom are close together.

Electrons from each atom feel the attraction from the protons in the nucleus of the other atom.

This attraction pulls the atoms together and the electrons are shared by both atoms.

The atoms bond because there is a strong enough attraction in both directions and room for the electrons in the outer energy level of the atoms.

The above water  molecule .....  is shown below ... in  the  WATER geometry using the  concrete/cement model  of the univeristy campus builfing Cole Hall.

Above, we had the H and H symbols of the Hydogen atom represented  in physical FORMAT VIA the larger sized ..... cement/concrete/brick builkfing lecture HALLS  ..... lecture HALL 1 and lecture HALL  2 of Cole Hall.

Tto complete the water molecule design  configuration ... we need an O = Oxygen .... a cirlce or round shape near Cole Hall.

The picture below shows the O =  Oxygen patallel in the  round  driveway /walkway in front of the COLE HALL building ( the  Hydrogen Halls).

The oceanography class provides additional information about the super-symmetry physics parallel of this situation. 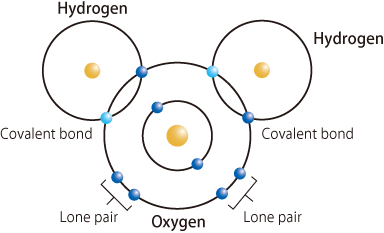 simonsfoundation.org › Features › Simons Science News‎
Nov 20, 2012 – As the elegant theory of supersymmetry   ....
Thus we see Nature's information systems dispay   ....  with  the water  molecule  at one size level of existence   .....  AND the Nature's systems architecture with the enlarged DEMO of  water moleule with attached parameters:

dictionary.reference.com/browse/parameter‎
Parameter definition, a constant or variable term in a function that determines the ... define a system and determine its behavior and are varied in an experiment.
-  the scene at Cole Hall, while Daniel Parmenter was pronounced dead  implies  .....

www.carlisle.army.mil/USAWC/parameters/‎
The Parameters staff is pleased to make available online all articles from previous years. Articles now are posted in complete volume numbers from 1971 to ...

https://itunes.apple.com/us/itunes-u/supersymmetry.../id384233338‎
The final quarter of our ongoing physics series with Leonard Susskind is devoted to supersymmetry, grand unification, and string theory. This course was ..

en.wikipedia.org/wiki/Northern_Illinois_University_shooting‎
The incident happened at the campus's Cole Hall at approximately 3:05 p.m. local ..... help explain why he chose a oceanogrphy geology class on Valentine's Day to open fire. ...

GCSE CHEMISTRY - Covalent Bonding in a Water Molecule - What ...

Bulletin of the Atomic Scientists:

www.thebulletin.org/‎
The        Bullet     informs the public  and influences policy through in-depth analysis

Thus we have some CLUES to the deepr levels of REALITY underlying the event.
We see the important relationship beween different levels ...different perceptions of REALITY ..
the water mocule in a chemistry LAB   glass container   ..... and the super-symmetry   WATER molecule architecture of the Cole  HALL building and driveway ......  designed by humanoid architects that are really water molecule extensions in a dermatolgy skin package.
Thus we see these water molecule HUMANOIDS express the primordial water moelcule instincts in their subconscious mind  that rose to a LEVEL of conscious  expression and display   VIA the Cole Hall architecture layout.

THe astrophysics VIEW (like a NASA astronaut in a space station) sees EARTH and see the building below  ...with the O = Region of Convergence (ROC) as used in signal processing analysis.

en.wikipedia.org/wiki/Virginia_Tech_massacre‎
About two hours after the initial shootings, Cho entered Norris Hall, which houses the Engineering Science and Mechanics ...

The Virginia Tech massacre was a school shooting that took place on April 16, 2007, on the campus of Virginia Polytechnic Institute and State University in Blacksburg, Virginia, United States. Seung-Hui Cho, a senior at Virginia Tech, shot and killed 32 people.

We ought try to understand the SIGNAL about  existence  and the conflicts among dimensions in our atomic/molecular daily lives.

en.wikipedia.org/wiki/11th_dimension‎
11th dimension may refer to: Supergravity, a field theory that combines the principles of supersymmetry and general relativity; M-theory, a proposed "master ...

Given the outline above, we see that the architecture of existence on EARTH is very complex and  compose of a wide variety of  objects and formats and expressions.   Thus EARTH space / time  is contains many physical  things:  people, buildings , cities, farms, forest,etc.
In addition, it now contains  symbol buildings:   languages for the   eye/optical nerve. A college textbook in  biochemistry is a symbol  building with special words,  data,   cell process diagrams,  flowcharts, etc.

Ten thousand years ago the biochemistry molecules  existed  in physical biology ,,,,, but did  not have symbol existence.
Thus ...in the last 100 years  ..the last 50 years...since 1960 ... these molecules experienced Darwinian  evolution into   the world   of symbols, nouns, flowcharts, etc.   Now, in year 2103 we can perceive ...sometimes...that a molecule as 2 identities  ....  especially since the biochemistry textbooks are emerging  into the James  Joyce   data stream of consciousness  ... that influences thought and behavior.

Now, the astrophysics VIEW of EARTH  is "The Tale of TWO CITIES"    ..... physical buildings  and symbol.s buildings.

Using general concepts ...we have

2) The 2nd HALL  event CHO  occurred on April 16, 007 at Norris engineering HALL with MR.CHO   with English language engineering, social engineering, and the  Virginia home  of the ....  Constitution of the UNITED STATES engineering.

Thus we see the convergence of these different  engineering systems at Norris   Hall  at Virginia TECH.

en.wikipedia.org/wiki/Hydrology‎
Hydrology is the study of the movement, distribution, and quality of water on Earth and other planets, including the hydrologic cycle, water resources and ...
Surface-water hydrology - Discharge