RD-blog-number-2537
The periodic atomic table has many formats of expression. One such format are atomic bio-physics structures with  EARTH LAB identifier: humanoid.
Let's examine the relationship between the periodic atomic table elements of of LIFE  and  human social and political behavioral  activities.
For this...we shall focus of the element of IRON and its INTERNAL  Margaret Mead nuclear family expressions ---> atomic social science activities --> that surface to a level of humanoid consciousness and result in human message activities --> such as the 1989 message to FermiLAB that is unanswered in year 2012 ..... because the Federal government does not allow the Office of Science or universities to acknowledge REALITY regarding the atomic SOCIAL SCIENCE signals.
Let's look at such a SIGNAL  ......... the year 1989 message ..known as:

en.wikipedia.org/wiki/Iron
Iron is a chemical element with the symbol Fe (from Latin: ferrum) and atomic number 26. It is a metal in the first transition series. It is the most common element ...

Iron is an element, and its symbol is Fe. Although iron rusts easily, people use it for making steel, automobile frames and parts, building structures and tools. The iron atoms is made of 26 protons, 26 electrons and has 30 neutrons. The atom has four spherical energy levels.

The atom has four spherical energy levels --> Messages for the OFFICE of Science ...Department of Awareness for IRON foreign affairs diplomatic policy..

Thus we see the  INTERNAL  messages from the IRON atom appear in EXTERNAL display format ..... such as the 26 electron message dislay of April 26, 1989.
What previous CLUES do we have about this  information transformation  from the periodic atomic table element IRON / ferrous oxide atom  ---> to EXTERNAL display format  on the geography surface of EARTH with humanoid activities.

Herbert Spencer in year 1855 / 1856 wrote about the relationship of the INTERNAL iron atom used in physics  and biology and its possible relationship to EXTERNAL display ..... expression formats of IRON.

The Correspondence Between Life and Its

The Cor +respond + ence Between Life and Its

The Core + respond + ence Between Life and Its

Th atomic  IRON Core asks for a human cortex respond .... Between Life and Its

A Journey to the Center of the Earth - Wikipedia

en.wikipedia.org/wiki/A_Journey_to_the_Center_of_the_Earth
A Journey to the Centre of the Earth (French: Voyage au centre de la Terre, also ... the Interior of the Earth) is a classic 1864 science fiction novel by Jules Verne.

Amazon.com: Journey to the Center of the Earth (Dover Thrift ...

www.amazon.com › Books  Literature & Fiction
"In 1864 Jules Verne published 'Journey to the Center of the Earth,' the charming narrative of the adventures of a party of three, led by a German professor of ...
Thus we has the ferrous oxide atom with 4  electron levels for the 26 electrons.

The addition, the  above  IRON atom with its INTERNAL  4 Levels of  electron shells expresses itself
VIA super-symmetry BIO-physics /  mirrors
in  EXTERNAL format (outside the atom)  BUT   inside the human body (INTERNAL biology)  of  red blood cells.
The INTERNAL blood cells  with hemoglobin and its 4 iron atoms    LATER   created an  EXTERNAL display of of iron army tanks with Shell elctron shellsin geography location of Tiananmen Square along with an EXTERNAL  display of the blood of killed students.

684 × 527 - Each molecule of hemoglobin contains four iron atoms, and each iron

Thus we see that the 4 Chinese ARMY tanks    combined with the news report of April 26,1989 ...convey a very important IRON atom foreign affairs signal to European and American universities.

What relationships can we identify ....and what subtle method does Nature use?

Above, we see the FermiLAB mirror signal.
The FermiLAB iron building is embedded within the NORTH  Pole magnetic field.
The building and the humanoids within  ... interact  with the magnetic field and thus  ....  the EVENTS of   IRON atomic number 26   on April 26, 1989  are of concern.
The ASIA iron event  can use NATURE's magnetic field FERRY communications lines AND reach FermiLAB  and influence the iron atoms inside the minds of physics  professors.   In year 2012...they ought consider trying to understand the process ..... to ensure that unknown ERRORS haven't occured ...... since  the 1989 EVENT was a periodic atomic table...Margaret Mead atomic anthropology iron ATOM signal  of some type of ERROR.

Is it important? Below, Iron  atomic mass communications HIGHWAY 56 goes to FermiLAB.    Who cares if iron exists and sends messages.

Below, we see the INTERNAL biology  TRANSFER system  .......  the origin and fate of transferrin-iron. 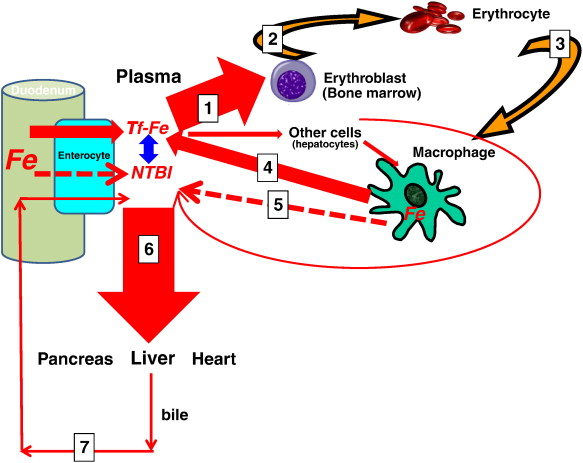 Fig. 1. The origin and fate of transferrin-iron (Tf–Fe) and non-transferrin bound iron (NTBI). Tf–Fe targets essentially (arrow 1) the bone marrow to contribute to the production (arrow 2) of red blood cells which are subsequently degraded (arrow 3) within the reticulo-endothelial system

The EARTH LAB  transfer system  would use the geography/geology  and the NORTH POLE  magnetic field interaction with humanoid iron proteins and their BRAIN thoughts of language  irony.
Thus the above INTERNAL biology system ...in EXTERNAL  display format .... would use
use Fe --> FermiLAB, Batavia, Illinois
and the iron LIVERS of humanoids at Lawrence  Livermore Labs in California.
Thus we ought look at the pieces to this puzzle.
To what extend do these systems of Nature exist and  of what importance is the April  26 IRON atomic number message.   What may need to be fixed or adjusted?

www.authorama.com/alice-in-wonderland-11.html
Alice had never been in a court of justice before, but she had read about them in books, .... Here one of the guinea-pigs cheered, and was immediately suppressed by the ... "I'm glad I've seen that done,” thought Alice "I've so often read in the ...
From Nature's VIEW .... FermiLAB and the University of  Chicago have some excellent LAB specimens  ..in humanoid format that do not recognize  the  26 atomic ENGLISH alphabet letters of 26 IRON  or the IRON atomic mass 56th Street significance.
IGNORE NATURE  ...... Northern Illinois University ignored the NORTH POLE .... thus the COLE HALL tragedy.